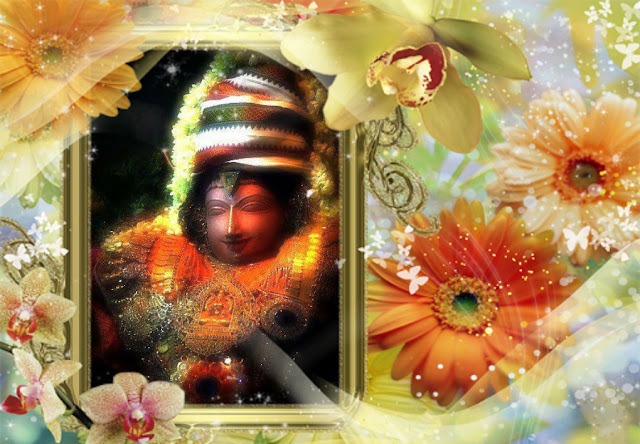 Maharishi Vyasa speaks “ Lord Rama was highly pleased after listening to illustrious Maharishi Narada, he showered highest of the boon.” 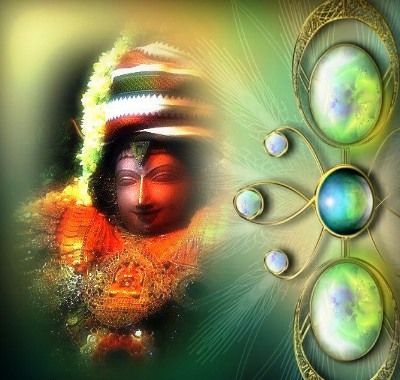 Posted by Vishwanathan Uma at 08:29 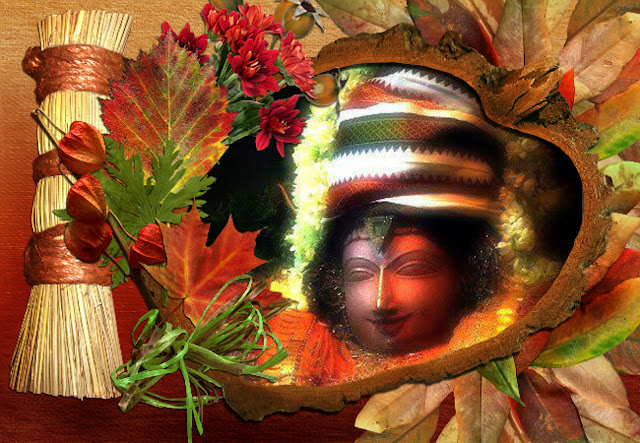 Sri Ramachandhra Sthavarajasthothra is highly propitious hymn was written by Sanathkumararishi, presiding deity is Lord Rama, Anushtup as Chandhass, Seetha as Beejam, and Hanuman as Shakthi, it is recited to please Lord Rama.

Sage Sutha speaks “  Illustrious Maharishi Vedavedya who is the son of Sathyavathi,  profound in all Shashtras enthusiastically replied to  Dharmaputhra.”

Yudhishtira speaks “Oh! Bhagavan/Universal soul, Oh! Yogin who is profound in Yogic practices, Oh! Shreshta/highly distinguished, who has thorough knowledge of all the philosophies, kindly narrate to me which is the greatest philosophy?  Who is supreme Lord? Who is most venerable and who should be meditated upon? In order to attain liberation from repeated births, Oh! Munisaththama/illustrious Rishi, I would like to hear from you, kindly  describe the same.”

Maharishi Vedavyasa speaks “ Oh! Dharmaraja, Oh! Mahabhaga/eminent one, listen to me carefully, deity  who is beyond human intellect, who is void of properties, who has  supreme radiance, who is pure,  who is auspicious will be considered as supreme Lord, he symbolizes superior philosophy  and source of liberation from repeated births. The recitation of sacred name ‘Rama’ is known as Tharakamanthra which  symbolizes absolute Bhramam, it is the essence Veda, capable to remove severe sins like Bhramahathya, worshiper who continuously recite the sacred names of Rama would attain Bhukthi as well as Mukthi, there is no doubt in it.  These are highly auspicious hymns known as Sthavarajam which was composed by Maharishi Narada and recited before supreme Lord Hari, it removes fire like three kinds afflictions, miseries, greif,  sins, and sufferings of poverty, it brings all kinds of auspicious, wealth, richness, good fortune, and opulence to the worshiper, it provides refined knowledge and wisdom, ultimately liberation from repeated births, Maharashi Narada revenertially greeted Lord Hari who has personified as Rama, he has the complexion of dark clouds, he is all-pervading, was seated on a majestic gem decorated throne positioned under the shade of  Kalpatharu on the gem decorated dias  in the Kingdom of Ayodhya, Dhasharathi was seated on the middle of lotus flower of eight petals, he is adorned in various gem decorated ornaments, he has the radiance of thousands and millions of Adhithya, Rama has the luster of  precious gem Indhraneelam, he is charismatic, he has wide and beautiful eyes, he is attired in the majestic silk clothe that has the resemblance to lightning, he has the radiance of thousands and millions of Bhanu/Adhithya, he is adorned in marvelous crown, gem decorated Keyooram, ear ornaments and bangles, golden waist ornament, he has symbol of  Srivathsam, his chest is adorned in precious gem Kausthubham and various pearl decorated ornaments that spreads intense luster all over the place, he is Raghava who is adorned in gem decorated exquisite ornaments, he has  two powerful arms, he is youthful, he has pleasing smile on face, he is adorned in garlands of Thulsi, Kundhapushpa,  and Mandharam, he is smeared in rich fragrant Karpoora, Agaru, and Kasthoori, he symbolizes Yoga and all the philosophies, he is Yogesha who is the source of inspiration in Yoga, he is always surrounded by Bharatha, Saumithri/Lakshman, and Shathrughna, he is eulogized by Vidhyadhara, Suradheesha, Siddha, Gandharva,  Kinnara, Yogeendhra,  and Maharishi Narada, he is worshiped by  Maharishi Vishvamithra, Vashishta and illustrious Rishis and Sages, Sanakadhis, and illustrious Yogis, he is Rama who was born in the illustrious clan of Raghu, he is extremely valorous, he is skillful in science of archery, he symbolizes auspiciousness, he is divine personified as Rama who has the eyes resembles to lotus flower petals, he symbolizes all the philosophies, Shashthras, wisdom and knowledge,  and supreme bliss, he has most desirable appearance,  he is the delight of Devi Kausalya, he is supreme Lord Hari,  Rama who is wielded in powerful bows and  arrows, he is supreme Lord Vishnu who has supreme radiance, he is pure and magnanimous, Maharishi Narada enthusiastically eulogized the glories of Rama, further Narada with folded hands meditated upon Lord Hari “ Oh! Raghunandhana who is the delight of Raghu,  born in the illustrious clan of Raghu,  you are  beyond human intellect, you are  eternal, you are  supreme bliss, you are all-pervading,  I shall meditate upon you. Oh! Ramachandhra,  who symbolizes supreme wisdom,  wide and beautiful eyes,  supreme consciousness, cause of happiness and welfare,  Oh! Hari who is primordial, Parathpara, wise and clever,  you are primeval deity , you represent Purusha, you are eternal, you are  supreme ascetic and extremely valorous, reside as soul in living beings, I shall always meditate upon you.” 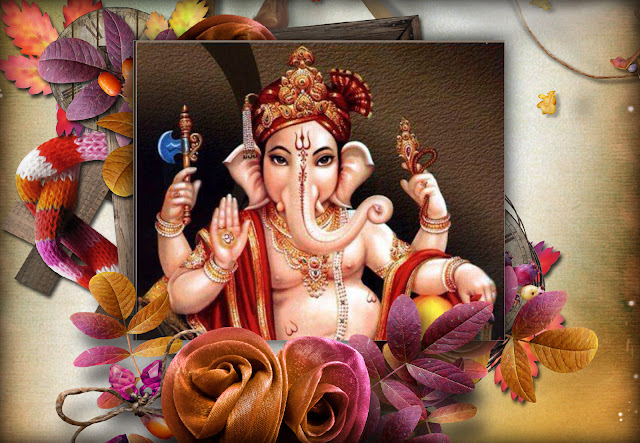 The highly propitious hymns of Ganeshasthavam does not require any  elaborate Nyasa/ prescribed gestures, or Samskara/preparation, purification process, or Homa/fire sacrifices, or Tharpanam/homage, or Marjanam/purifying process,  recitation of  Panchashath Sahasrajapa/fifty times of thousands of sacred names of Lord Ganesha,  would  provide nearness to religious fervor, worship of Lord Ganesha would bring the piousness of feeding five hundred Bhramins, Ganesha Sthavaraja is highly auspicious hymns was written by Bhagavan Sadhashiva Rishi, it has Anushtup as Chandhass,  presiding deity is Lord Mahaganapathi, it is recited to please Lord Ganesha, worship of Lord Ganesha who symbolizes pleasure personified with intense devotion and faith, recitation of these sacred hymns, offering sweet rice puddings with the nine types of grains,  he is worshiped by all without any differentiation  of   class or creed, he is pure, he is void of properities, he has no specific appearance, he is supreme spirit, he symbolizes virtues, welfare, happiness, good fortune, etc… he is supreme bliss,  he is beyond human intellect, hence I shall always meditate upon Lord Ganesha who is elephant faced, he is self-manifested and void of illusion, Oh!  Ganadhipa who is the commander of Ganas,  Oh! Eshasoonu who is beloved son of Lord Shiva, he is  favorite of all, he is  divine personified symbolizes five essential elements, he is wielded in powerful weapon, he is mighty Lord, he symbolizes wealth, richness, opulence, hurricane, storm,  and wind, he is  the initiator to religious deeds,  he symbolizes Earth,   moon who is the Lord of night, sun who is the Lord of day,  and all the living and non-living things,  he is  the cause for Universe and its living beings,  he is  all – pervading, he symbolizes peace and serenity, he has numerous incarnations, he has  blue luster resembles to  flowers of Thamala, he have one tooth and  most desirable appearance, he is elephant faced, I shall reverentially prostrate before supreme Lord  Gajanana who has the appearance of Chandhra above the ocean of nectar, he symbolizes Veda and all the art forms,  and supreme intellect, he is supreme soul who removes the darkness of ignorance like sun in the early hours, he is the source of eternal bliss, I shall prostrate before Lord Vinayaka who is adorned in crescent moon, he is adorned in various  ornaments of precious yellow metal,  garland of bell, and  magnificent anklets, he is dancing according to the beats of drum producing unique sounds,  I shall always prostrate before supreme Lord Vinayaka who is the commander of commanders,  he is supreme spirit which represents art forms,  supreme intellect, and all creative forces, he is Lord of Ganas, he is store house of virtues, he is created by Maheshvara, I shall always prostrate before the lotus feet which is the source of abundance of glories, might, super human powers, etc.. I shall meditate upon Thundhila who is fierce, passionate,  and has the might of Goddess Durga, adorned in  flowers of white and particular kind of grass, he is worshiped by Sanandhanas and illustrious Siddhas, he is victorious, he can be formidable too, he is Lord of Suras and Asuras as well, he eradicates all the obstacles of the worshiper, he is most favoriable and most promising to his passionate devotees, his lotus hands are decorated with bangles, his lotus feet are adorned in marvelous anklets, he is Lord of Ganas, he symbolizes store house of virtues, he is adorned in Phaneeshvara/king of serpent as ornament, he is all pervading, he is the source of peace, and joy, he is supreme soul who eradicates miseries, sorrows, perils, afflictions and greif of worldly existence, whoever recites these glorious verses in the hours of dawn, noon and dusk,  praising the splendor of Lord Ganesha with intense faith and devotion, would be blessed with wealth, richness, good fortune, religious fervor, wisdom and knowledge. 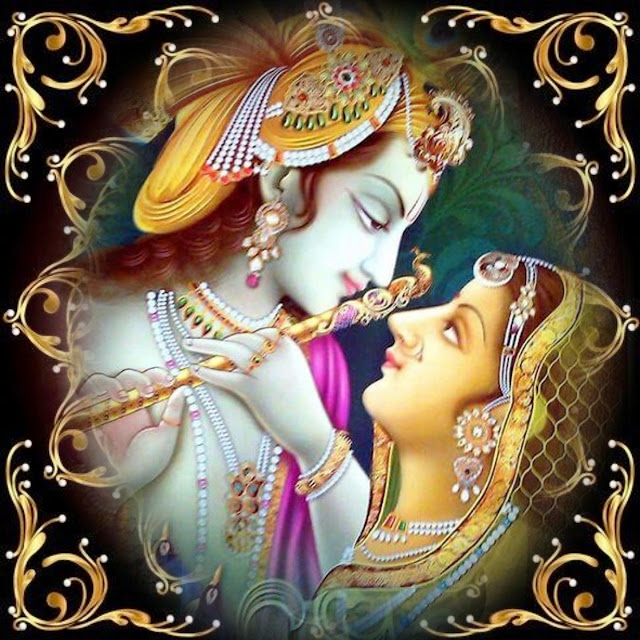 Worship of supreme Goddess Sri Radharani on the auspicious days of full moon , Ashtami, Dhashami, Ekadhashi, Thrayodhashi etc..  after following austerities, would fulfill all the desires of the worshiper,  worshiper who stand on the knee deep, or navel deep or chest deep or neck deep waters of  Radhakund and recitation of these sacred hymns would attain all religious fervor, worshiper would attain all kinds of richness, good fortune, wealth, opulence, prosperity and nearness to Goddess Radharani, worshiper would attain the greatest boon of witnessing the Nithyaleela of Goddess Radhani along with Vrajadhipa/Lord Krishna.