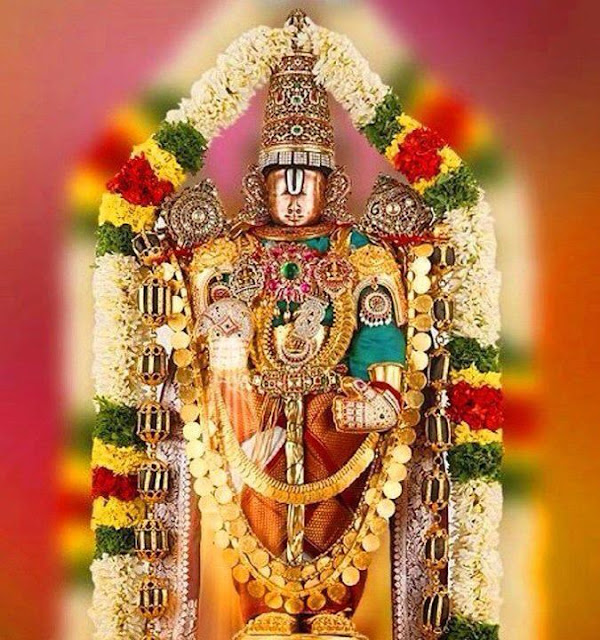 I shall meditate upon supreme Lord who is the Lord of living and non-living things, he is divine personified as Bhoothadhipa who is the commander of living beings, he is the destroyer of enemies of Suras, he is worshiped by all Bhoothaganas, he is worshiped by Lord Devendhra, he is eulogized by his ardent devotees, he is extremely compassionate to worshiper, he is divine personified as brother to Gajamukha who has elephant face, he is adorned in magnificent earrings, he is adorned in beautiful gem decorated ornaments on the neck, his eyes are resembles to lotus flower petals, he has the luster of blue lily, he fulfills  desires of the worshiper, he eradicates the evil effects of Kali era, he is the protector of distressed people, he safely guides his passionate worshiper through the ocean of Samsara, he is worshiped by the clan of Kings of Pandya, he is the protector of clan of Pandya, he eradicates miseries and sorrows of the worshiper, he is the protector of people who are undergoing various afflictions, he protects the destitute and desolate, he guides the worshiper to cross the ocean of Samsara, he eradicates the clan of enemies of the worshiper, he is the safest heaven to the pious and righteous people, he is worshiped by pious and righteous people, he is promising to the people who are surrendered at his lotus feet, he is divine personified well known in the whole Universe, he symbolizes auspiciousness, he resides in the intellect of the pious who eulogizes his endless glories, he is extremely charming and most desirable, he rides on the lion and he has great speed, he eradicates the darkness of ignorance in worshiper, he imparts the supreme knowledge of Bhramam, he is divine personified and  mysterious, he represents various sidhdhis, he is the Lord of living and non-living things in the Universe, he eradicates all kinds of miseries and sorrows of the worshiper. 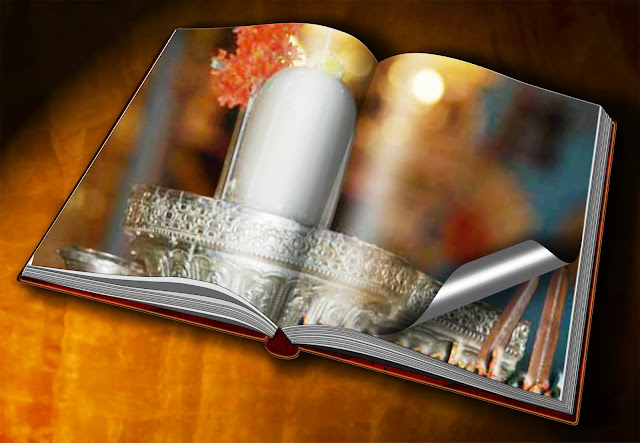 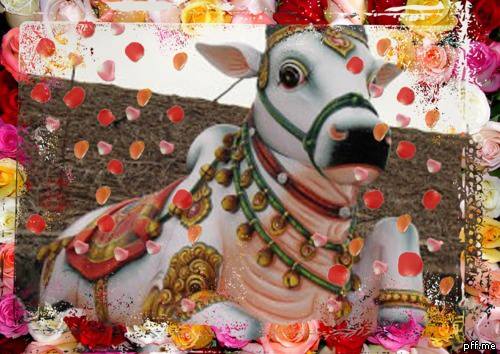 I shall meditate upon Lord Nandhikesha who has great splendor, always immerses at the sincere service of supreme Lord  Esha who is wielded in Parashu and holds antelope in one hand,  smeared in sacred ashes from the funeral pyre,  adorned in crescent moon and sacred river Ganga on  attractive matted hair locks, crushed the price of demons of Thripura who is Lord of Pramathagana,  divine personified whose lotus feet are worshiped by Lord Bhrama, Lord Indhra and Acchyutha.

I shall prostrate before Lord Nandhikesha  who is absolute Bhramam, always immerses in the meditation at the lotus feet of Lord Shiva, he has sharp horns on the forehead/Theekshnashringa, he symbolizes sacred Veda, he has unique form, he is celestial bull, he resides in the highest peak of Mount Himalaya, he is Lord of Lords, he is most beloved of Lord Shiva, he is serving as majestic throne to Lord Shiva, he takes immense pleasure in dancing with the Ganas, he represents fire, and Lord Kubera, he is adorned in pure Chamara, he represents Vedanga, he is beloved of Kanaka/one of the seven tongues of fire, he resides in the supreme abode of Mount Kailasa, he is divine personified as celestial bull, he is upright and sincerely devoted to supreme Lord Shiva, he is beloved of Shruthi, he is adorned in white Upaveetham/sacred thread, he takes immense joy in the performance of dance, he is adorned in Kinkini/tinkling bells, he is highly enthusiastic, he is Hadakesha, he is adorned in jewels of precious yellow metal, he represents Vishnu, Prithvi,  and Lord Kubera, he is celestial vehicle of Lord Shiva, he is fond of grasses, he has lovely smile, he has sharp horn, he is fond of nine types of grasses, he is the essence of Veda and sacred hymns, he is divine personified as celestial bull, he is too compassionate, he has great speed, he is eminent,  and charming, he is famously known as Shivayogi, he is the commander of water, he has most charming appearance too, he is Vrishesha/celestial bull, he has Soma, Surya and Agni as eyes, he is extremely charming, he is adorned in crescent moon, he has beautiful appearance too, he eradicates evil effects of Kali era, he has great effulgence,  he is extremely valorous, he is an ascetic, he symbolizes fire, he is Prabhu who showers abundance of boons to worshiper, he is fierce as well as  pleasant too, he is most desirable, excellent, and divine with extreme brilliance, his eyes has the resemblance to flame, he can be formidable too, he represents Kala, Keshava, and all the deities, he has white complexion, he serves as magnificent throne to Lord Shiva, he symbolizes pure thought, his sharp horns are adorned in precious ornaments,  and white Chamara, he is Devaraja, he symbolizes light and happiness, he is scholarly, he is Parameshvara, he has unique form, he has no specific forms, he annihilates Dhaithyas, his nose is adorned in precious ornament, he is imperishable, he consumes rice mixed with sesame seeds/Thilathandula, he is Nandhi who causes obstruction, he is powerful, and  charming, he is pure, he is adorned in silk thread, he is Kalakanda, he resides on the mountain peak, he is  virtuous  son of Shiladhana, he represents cause, he is devoted to Shruthi, he is adorned in marvelous bell, he is virtuous and auspicious as well, he is the source of delight of Lord Vishnu, he holds the flames of  Lord Shiva, he symbolizes auspiciousness, he is sinless, valorous,  and permanent, he is sincere devotee of Lord Shiva, he is eternal, he is beloved of Pradhoshapriya/Lord Shiva, he is Vrisha/celestial bull, he is adorned in magnificent earrings, he has massive form, he has white complexion, he is universal soul and he is most celebrated.

Posted by Vishwanathan Uma at 13:17 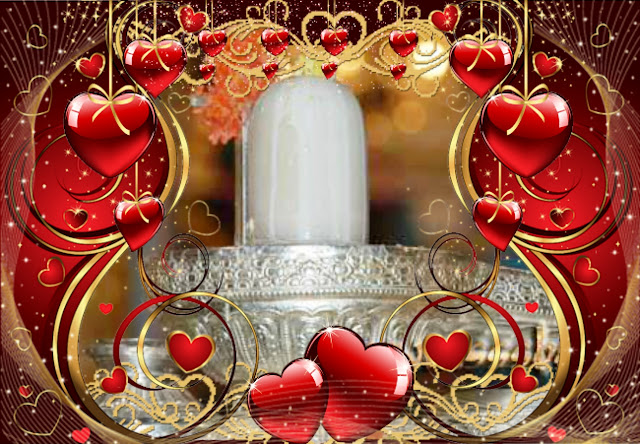 I shall prostrate before Lord Ardhanareeshvara who symbolizes supreme wisdom and knowledge, he is Mahayogi who symbolizes Yoga and attainable through intense Yogic practices, he is wielded in powerful weapon Pinaka, he is adorned in gem decorated ornaments all over the body, he is adorned in magnificent gem studded crown,  he has attractive matted hair locks, he is adorned in sacred river on matted hair locks, he resides on the highest peak of Mount Kailash, he is Mahajjyani who symbolize supreme knowledge, he immerses in deep meditation, he is immeasurable/unfathomable, he represents treasures of Yoga, he guides us to cross the ocean of worldly existence, he is beloved of his passionate devotees, he is absolute Bhramam, he is all pervading, he represents Lord Vishnu, he is primordial, he is mounted on celestial bull, he is attired in skin of animals, he has magnificent form attired in majestic silk clothe, he is the source of liberation from repeated births, he symbolizes Moksha, he killed the demon Andhakasura, he is Jagathpathi who is the Lord of Universe and its living beings, he symbolizes supreme wisdom and knowledge, he is the source of offspring, he is the Lord of Ganas, he eradicates pride and forgetfulness in the worshiper, he is adorned in crescent moon on matted hair locks, he has boisterous voice, he is fond of Samaveda, he is Shankara /auspiciousness and Sadhashiva/supreme bliss, he is imperishable, he represents supreme consciousness, he is eternal bliss who is surrounded by all the deities, he holds colossal fire on one hand and antelope on the other, he symbolizes auspiciousness,  he is triumphant, he is the Lord of fire sacrifices, he destroyed the Yajja of Dhakshaprajapathi, he graciously accepts oblations from fire sacrifices, he crushed the pride of Yama, he showers abundance of boons to worshiper, he is worshiped by Goddess Sri Mahalakshmi, he holds majestic flag that has the symbol of divine bull, he is smeared in sacred ashes from the funeral pyre all over the body, he is adorned in Rudraksha, he is mighty Lord, he represents trinities/Lord Bhrama, Lord Vishnu and Lord Maheshvara,  he is Parambhramam, he is adorned in King of serpent, he is eternal, he is omniscient, he is all pervading and he is most admirable in the three worlds, he is divine personified as  Ardhanareeshvara who is worshiped by illustrious Rishis and Sages, he is Lord of Lords, he is divine personified for the purpose of imparting knowledge of Bhramam, he has Ravi, Chandhra and Agni as three eyes, he is Universal preceptor, he is Mahadeva, he symbolizes supreme bliss, he has attractive matted hair locks, he is Mahayogi who symbolizes supreme wisdom and knowledge, his matted hair locks are the resting place of Vyomaganga/Akashaganga, he is pure, he is highly enthusiastic, he symbolizes greatest belief and philosophies, he provides excellence in speech, he represents sky, he fulfills all that desired by the worshiper, he dispers  the fruit of the desires of the worshiper, he is beyond human intellect, he is supreme bliss, he has supreme radiance, he is void of changes, he represents  Veda, Vedanga,  and Chathu:shashti Kala/64 art forms, he eradicates extreme fears and anxieties of worldly existence, he is the safest heaven to worshiper who are surrendered at his lotus feet, he has bluish throat, he has Agni as eye on forehead, he is attired in  skin of elephant, he guides us through the righteous path, he is void of impurities known as Ragadhvesha, he fulfills the desires of the worshiper, he is supreme ascetic, he is beloved of Lord Vishnu, he is supreme Bhramacharin who strictly follow austerities, he is Sanyasin who firmly follows the rite of Sanyasashrama and he follows the rite of Grihasthashrama as well, he is liberal/restraint, he is serene, he is absolute truth, he is extremely compassionate, he is Yogapattabhirama, he holds divine musical instrument Veena, he resides in non-living things too, he symbolizes intellect and prosperity, his hands are in divine Chinmudhra posture, he holds sacred scriptures in one hand, he eradicates afflictions from evil spirits and demons, he eradicates all kinds of illnesses, I shall repeatedly prostrate before Lord Dhakshinamoorthi who is Lord of Lords. 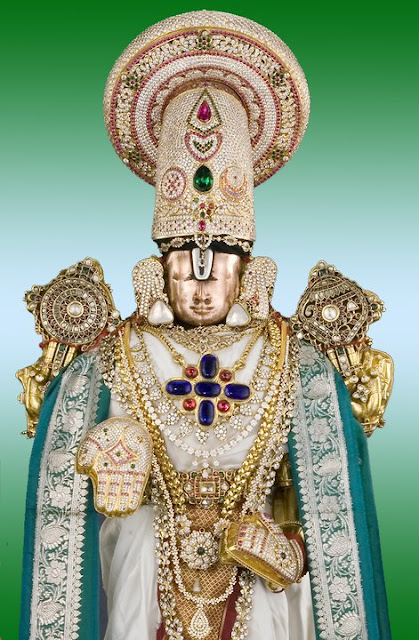 Posted by Vishwanathan Uma at 12:51