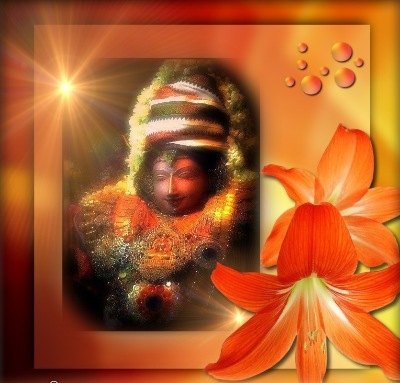 Sage Agasthya spoke “ I shall meditate upon supreme Lord Rama, who has strong and powerful arms,  his eyes has the resemblance to lotus flower, he is unblemished, he has pleasing personality, he has the complexion of dark clouds, he is wielded in bow and arrow and he is gracious.  Oh! Sage Sutheekshna, listen to me carefully, Srirama Kavacham is one of the most auspicious hymns which could fulfill all the desires of a worshiper. The supreme Lord Rama is the essence of Adivaita philosophy, he is eternal bliss, he is Shuddha Sathva, he is all pervading and has supreme brilliance, whoever meditate upon the lotus feet of Lord Rama would attain the knowledge of absolute Parambhrama, relentless recitation of the sacred name “Rama” will destroy all the sins, ultimately attain the lotus feet of Lord Vishnu.  The sacred name ‘Rama’ is a protective text which is capable to provide highest of the pieties, it liberates from the repeated birth; it removes the fears and death as well.   Whoever recites the Tharaka Manthra ‘Ram’ would attain the the knowledge of Bhramam.”

“ I shall meditate upon the supreme Lord Sri Ramachandhra, who fulfills all the desires of his devotees, he has the complexion of dark clouds, he is attired in majestic clothes resembles to lightning, he has attractive limbs, he has broad eyes, he is charismatic, he has matted hair locks, he is with Goddess Sita and Lakshman, he is wielded in bow and arrows to destroy the demons, he is the destroyer of enemies, meditation upon Lord Raghupathi will remove all the fears of thieves and enemies, he is attired the skin of deer, his body is smeared in ashes, he has beautiful hair locks and wielded in Kodhadam, he is a great warrior who destroyed the demons and Ravana by the powerful arrows in the chariot fight, he was assisted in the war field by Lakshman, and various monkey warriors, valorous Hanuman and Sugriva who had mountains and trees as their weapons in their hands, these powerful warriors with high speed and the thunderous noises of Humkara attacked Ravana in the battle field,  Oh! Rama, destroyer of enemies, kindly destroy the evil spirits/Bhootha Pretha Pishacha as well.  This glorious hymn of Sri Rama Kavacham is an protective shield made of gem and it provides Siddhis/spiritual power to the worshiper, Oh! Sutheekshna kindly listen to them.”